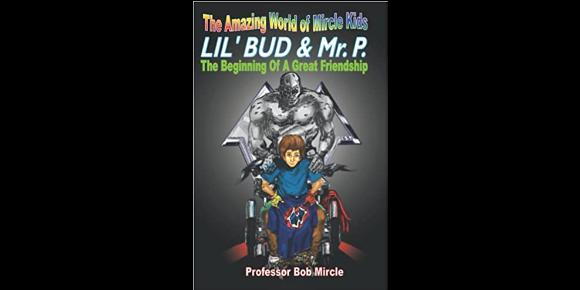 Discover and Inspire All Kids to Share Their Gifts!
This book can help any child forge unshakable self-esteem with a victorious attitude toward achieving dreams.

Discover the adventures of a superhero ‘Mircle’ Boy, (Lil’ Bud) who has cerebral palsy, his best friend Andrew, who has Asperger’s disease, Professor Bob, is a schizophrenic mega-genius, and Mr. Pleomorph is an amazing computerized robot. Told from the perspective of Lil’ Bud and his friends, these stories will introduce a new world waiting to be discovered.

It has been written for all of us—those with special needs and those without—and directs attention to the fact that right or wrong, we all process information differently.

Processing is a variable that begins as soon as we are conceived and is influenced by multiple factors, including, but not limited to, what we are exposed to during the time we spend in our mother’s womb, our genetics, our position in life, our level of wealth, our medical illnesses, our mental status, our age, our gender, and our environment.

Processing controls the data collected and our response to this data. It controls how we view ourselves, others, and the world. It controls the differences between men and women, diseases and “normality,” the seen and the unseen, common versus uncommon senses, and conscious versus subconscious responses.

Although most people spell miracle as “miracle,” some people with a special need called dyslexia, view it as “mircle.” I decided to write it as“mircle” to illustrate this important point: not everyone sees and processes life's events in the same manner.

In today’s media, few books, movies, or comics are about children with special needs. Due to the differences, the special-needs population has, members of mainstream society often have a lack of understanding.

As a result, mainstream entertainment has almost completely shied away from this group of people. In my opinion, this has been a grave mistake on the part of society. According to the most recent US Census, more than 4 million children are born annually in the United States. Approximately 15 percent or 600,000 of those children have a learning disability, 70,000 have a form of autism, and 120,000 have a birth defect, including 10,000 with cerebral palsy.

Overall, there are 43.5 million children who have dyslexia, the most common form of a learning disability, including the author. Some form of special education is given to 13 percent or 6.7 million of all public school students between the ages of three and twenty-one.

Unfortunately, even with these numbers, medical attention is often given in proportion to the individual’s insurance or financial ability to pay medical bills.

Therefore, many thousands of children of all ages with special needs go without needed medical care. I think many people fail to realize the value that many of these children have brought to our society. In my book series, I want to emphasize in an informative, exciting, and entertaining way that many people with special needs have brought great value to our society—people like Beethoven, Ray Charles, Thomas Edison, Einstein, Poe, Patton, Harriet Tubman, Barbara Jordan, Walt Disney, Art Tatum (the term Tatum Unit was coined by an MIT Student, as the fastest perceivable musical note), Steven Hawking, Stevie Wonder, Dick Cavett, Itzhak Perlman, Helen Keller, Rahsaan Roland Kirk, Mozart, Michael Jordan, Frederick Handel, George Washington Carver, and Freda Kahlo.