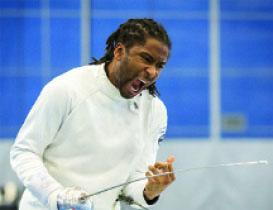 Provides Tips for Business Owners (born September 26, 1987) is an American  épée  fencer. He represented the United States in épée in the 2016 Olympic games in Rio de Janeiro and competing to make the 2020 Team in Tokyo.

I’ve had detailed strength/conditioning, technique, and bouting plans since 2010. These were evaluated for performance and changed as the season developed. A strong business strategy is the same way; a clear goal that fits in with your business’ objective, environment and the culture and having a team with a tactical plan to achieve these objectives in the short term.

2-Dealing with stress – There have been three instances where I walked into a competition and I needed to win or else I wouldn’t make that year’s World Championship Team.. Understanding how you perform with psychological stress and having a solution to embrace or alleviate it was a key in maintaining my performance .

3-Manage Burnout – When an athlete has lost training/life balance burnout is often close behind. It’s important to schedule time away from a high pressure environment.

4-Decision Making – The difference between winning and losing a bout is often one mistake. “Situational training” is where Creating high pressure scenarios with absurd disadvantages. This is just the athletic equivalent of Scenario Planning. Creating and solving these narratives; creates a robust, flexible business plan ready for any situation in an unpredictable marketplace.

5-Perseverance – The Olympics overflows with stories of athletes who reached Olympic Gold after years of struggle. The most successful business owners also have the will to overcome any obstacle. It took 17 years to make my first Olympic Team; the path to success is a marathon of will to overcome and that will take time.

Pryor’s first sport was soccer. He took up fencing when he was 11 after hearing about the sport from a friend. He was taught by coach Bill Reith at the Alcazar Fencing Club. He was later recruited by the Ohio State University, winning a team title in his junior year and earning twice All-American honors. In 2009 he graduated with a degree in English, hoping to pursue a career as a writer.

Since then he has been on 5 World Championship Teams (2013-2018), 6 Pan Am Championship Teams (2012-2018), Bronze Medalist Individual Pan Am Games 2015, Silver Team Pan Am Games 2015. In 2015 the Resident Athlete Program was discontinued for Men’s Epee and he moved to New York where he qualified as an individual for the 2016 Rio de Janeiro Olympic Games finishing the year ranked 22nd in the World.  Currently he resides in Harlem and coaches part time with Sharper Mind Training and trains to qualify for his second Olympic Team for the 2020 Games in Tokyo, Japan.     [email protected] mention Healthy Referral When contacting Jason.